Dr Wambach discovered that folks choose their lives. They may choose the life themselves or they may receive help and advice in choosing. We may of course not be all that keen to reincarnate again but it does appears that returning to a physical incarnation is something we accept as a natural part of our development process. Many readers might think, ‘No way, I would never have chosen this life,’ but if things appear difficult then that is because there are challenges to be overcome in every life. Dr Wambach also discovered that folks incarnate with other people they have known from previous lifetimes. This can be because we have relationships to work out between those individuals, perhaps we didn’t get on in a past life so this time we can try a bit harder. Or they are people we incarnate with who have chosen to work with us and help us through difficult times or help us to achieve certain objectives. There are many permutations and it must quite a logistical headache for the giant ‘spirit computer’ in the sky to bring it all together. 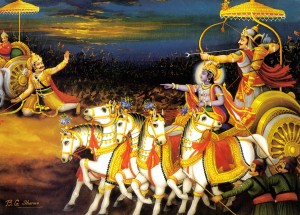 Thinking about choices in life I’m reminded of the Bhagavad Gita which I came across many years ago when I was hungry for all thing to do with reincarnation. The Gita is part of the epic Mahabharata Hindu text. In the Gita, Prince Arjuna an acclaimed archer is about to start a battle against a rival family who are after his kingdom. The two armies are massed ready to fight. Arjuna is fortunate to have one of the Hindu deities Lord Krishna as his chariot driver. Arjuna though has a crisis just before the battle, he sees his relatives, teachers and friends in the two armies and his self-assurance melts away. His bow slips from his hands and he sits dejectedly in his chariot his eyes filling with tears. He tells Krishna. “I cannot slay my kinsmen not for all the three worlds much less a kingdom.” Krishna turns to Arjuna and says, “This is your hour of trial Arjuna, such base despair does not become you, it is inappropriate. The call to battle has already been sounded arise and take up your arms.” This surprising response from Krishna is followed by telling Arjuna, “The soul in man is neither born nor can it die. Weapons cannot cut it. Fire cannot burn it. Water cannot wet it. Wind cannot dry it. What makes you think you can kill the soul? Just as a man discards old clothes and wears new ones the eternal soul sheds a dead body and enters another.”

So Krishna is telling Arjuna to stop feeling sorry for himself and do his duty and get on with the battle. You can kill your enemies but not their souls which reincarnate in new bodies. Now you would be forgiven for thinking Arjuna has a point, why start a war against your relatives, surely there must a better way. But we have Krishna in the driving seat and Krishna has a different view on the matter. Pretty unlikely I know but if Jesus had been Arjuna’s chariot driver it would have been a case of turn the other cheek, make up and let’s go home for a spot of supper. Not so with Krishna. although I have read many interpretations of the Gita I still feel a little uncomfortable about it. Krishna does finish off his pep talk to Arjuna with a fantastic spectacle where Krishna reveals himself to Arjuna in his divine form. This does the trick and Arjuna goes on to win the battle and keep his kingdom. We can see Krishna’s point of view as well in that Arjuna has a job to do in fulfilling his destiny, overcoming his doubts and defeating his enemies. Good triumphing over evil and you could argue its a life lesson for the vanquished foes to suffer and perhaps that was one of their lessons they incarnated to learn.

So in our owns lives there are occasions when we have to make life changing decisions and it’s hard. We have to sleep on it, discuss it with close friend’s because that’s maybe why they incarnated at the same time to help us make the right choice. 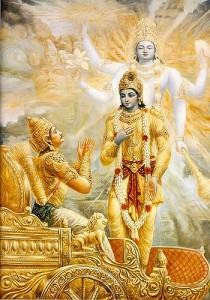 “The god Krishna explains karma yoga to Arjuna. He tells him he must act, but not be attached to the fruits of his actions. He must fulfil his duty as a warrior and fight for good to triumph over evil. Krishna reveals his divine form to Arjuna on the battlefield. As he does Arjuna sees the whole universe subdivided into many worlds but united in the body of the highest Deity.”